The collaborative team of Nicholas Kahn and Richard Selesnick recently filled the Galleries at  Cleveland State U. with posters, postcards, and photos from their magical world of speculative fiction and false history–Truppe Fledermaus and the Carnival at the End of the World.

While Kahn and Selesnick’s magic realism reminds me of artists like Magritte, or Rousseau, it has more in common with a novelist like Gabriel García Márquez. As in Marquez’ One Hundred Years of Solitude, the aslant Carnival is filled with the improbable, impossible, and the ‘not true,’ all reported matter-of-factually.

Carnival mementos consist of posters promoting the carnival, fiction, and photographs. One entire wall is filled with posters and notices. The posters seem to be hand-crafted and many of them are satisfying works in their own right, as can be seen in this photograph from the exhibition. 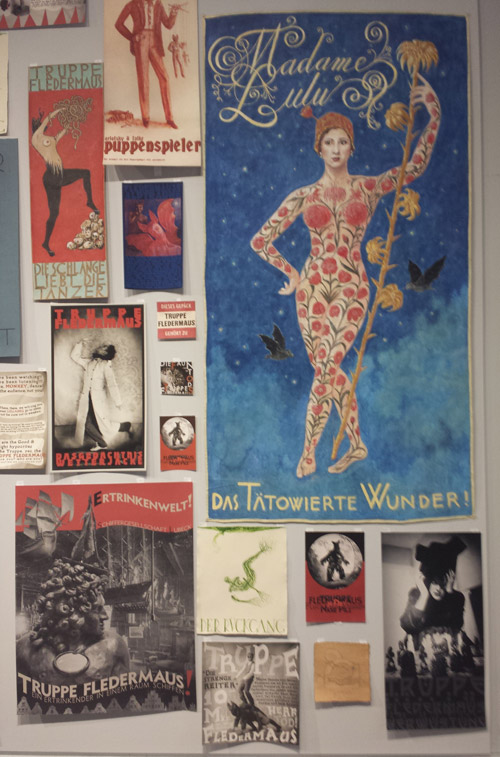 Wall of posters from ‘Carnival at the End of the World’

Pages of fiction are interspersed throughout the exhibition. The fiction is the carnival world’s ‘history’ of events. Its style is polished and seductive but too self-conscious and precious for my taste.

The heart of the exhibition is large-format photographs of carefully constructed scenes and set pieces, as shown in the following photograph. 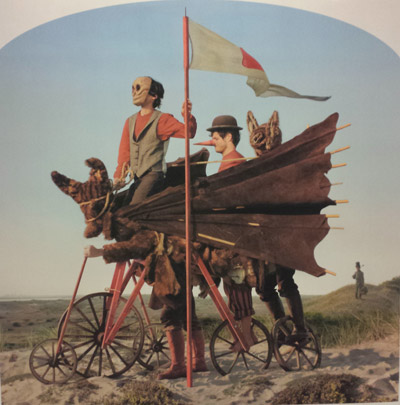 From ‘Carnival at the End of the World’

Photographs are adroitly doctored to look old-timey and archival, which enhances their arresting dreamlike quality and moves them into the unspecified past. The carnival travels through the same land inhabited by, say, 14th century shrines to the even older Edward the Confessor, and King Arthur–the land of legend and dream.

Figures are animated by purposeful activity that on close scrutiny dissolves into Bruegel-like comic pathos. There is a lot of showmanship and voila moments, as would be expected at a carnival. Several of the pieces have a sinister tone, but even these don’t stray far from a child’s scary story.

Because I did not care for the accompanying literature, I ignored it. Perhaps this means my review falls short of the mark. I defend myself with the visual pieces on display here. Their strength needs no explanation and stand on their own.

I enjoyed the show immensely.

[Photos mine but work shown are copyright the artists.]