We live in Vermilion, Ohio, a small town of less than 10,000 on the shores of Lake Erie.  Vermilion is 40 miles west of Cleveland in the area called the Western Reserve. The Western Reserve originally belonged to Connecticut and was reserved for Revolutionary War veterans or Connecticut residents whose lands were destroyed by the British. Our part of the Western Reserve, The Firelands, was reserved for patriots whose lands were burned during the war–hence the name. The Connecticut connections is still easily seen with town names like, New London, Mansfield, and Norwalk,  Vermilion has always been a nautical town and still looks the very picture of a New England fishing village.

The Vermilion River empties into Lake Erie and is the heart of the town. The river, even at its mouth, is too shallow for the big freighters, so the heavy industry that spoils the waterfront of many lake cities passed over Vermilion. As a consequence, Vermilion’s waterfront is totally given over to pleasure boating, which gives the city its picturesque quality. Vermilion, with its numerous marinas, is the largest marina complex in the entire Great Lakes. In the fall, the charter boats take over and are the last boats to be dry-docked for the winter.

This photo was taken from my boat, the Betty Jane, while moving down the Vermilion River to Lake Erie.  The wrapped bridge was not an art project—no!  The contractors wrapped the bridge as they were painting it.  The City’s water tower, an important landmark when seen from the lake, is off the picture to port (left for you land lubbers) and was, by happenstance, being painted at the same time.  It too was wrapped.  The two giant wrappings gave the City of Vermilion a strange and memorable aspect during the summer of 2012.

My son John-Parker and The Betty Jane:

The Betty Jane Ready for the Season 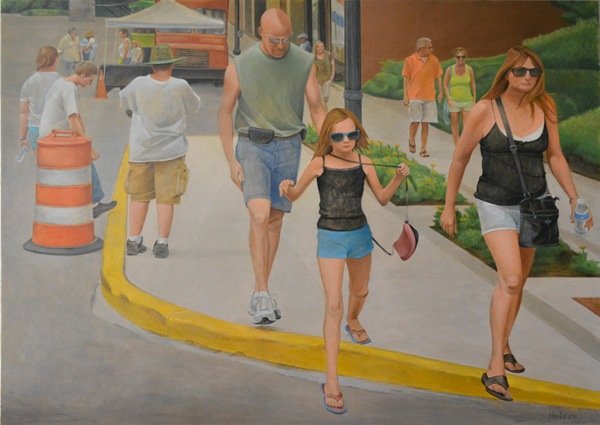